Welsh ICE have teamed up with Caerphilly County Borough Council (CCBC) to hold a hackathon event, with the goal of finding solutions to foundational economy challenges.

Five teams of four took part in the event held at here at ICE where participants were given twelve hours to research and identify a genuine problem or issue in the foundational economy in Wales, and then create a project, product or service that would solve it. The winners would receive a prize of £500 as well as support in potentially bringing their pitch before the Welsh Government’s Foundational Economy Challenge Fund.

The Foundational Economy Challenge Fund was launched by Deputy Minister for Economy and Transport, Lee Waters in May (2019) and aims to develop Wales’ regional economy to ensure that the core services and businesses are supported. £3m has been set aside for the fund, with 1.5m ring-fenced for the Valleys Taskforce area, and businesses and enterprises are encouraged to apply for up to £100,000 of project funding.

Starting at seven in the morning, teams were given the brief before breaking away to work from the Campus’ coworking space, researching and developing their ideas before pitching to a panel of judges eleven hours later. They were supported with inspirational talks, guidance and workshops along with breakfast, lunch and dinner!

Historically, A hackathon is an event where software developers, graphic designers and project managers collaborate over a period of time to create a functioning piece of hardware or software that solves a problem. The concept has been adopted across sectors and today represents a collection of minds working collaboratively to create a solution or proposal to a set problem.

After eleven hours, the five teams came together to pitch their ideas to a panel of judges made up of local businesses and council representatives. The teams came up with a number of novel ideas. From helping councils meet their carbon neutral targets by providing a one-stop service to integrate older properties into smart homes, to solving the depreciation of the high street by providing shops and businesses with an online platform to keep customers shopping local.

However, the winning idea sought to bridge the gap between community and business by creating a time and skill sharing app that encouraged collaboration. The concept of the app ‘Swapp’, was created by Francesca Irving, Alexis Charkiw, Adam Sadler and Claire Vokes and in just 11 hours the team researched the issue, costed a solution, formulated a business plan, built a website and began creating an online presence.

Campus Director at Welsh ICE, Jamie McGowan said the event highlighted what can be achieved through collaboration:

“We knew the challenge was going to be tough as issues such as food, housing, energy and local economies are not something that can be solved in twelve hours. But what we hoped to see were teams beginning to identify individual problems in the broader topics and devise a concept to tackle them.

“The teams were fantastic and really responded to the challenge. All the ideas showed promise and a couple had been developed to a point where you could see a clear route to market. It really shows what can be achieved when given focus, and the message to all our participants was to realise what they have accomplished in a short space of time and to go out and do it again.”

The teams were encouraged to go on and continue developing their ideas, with the hope that they may go on to pitch them to the Foundational Economy Challenge Fund and play their part in helping tackle grass root challenges. 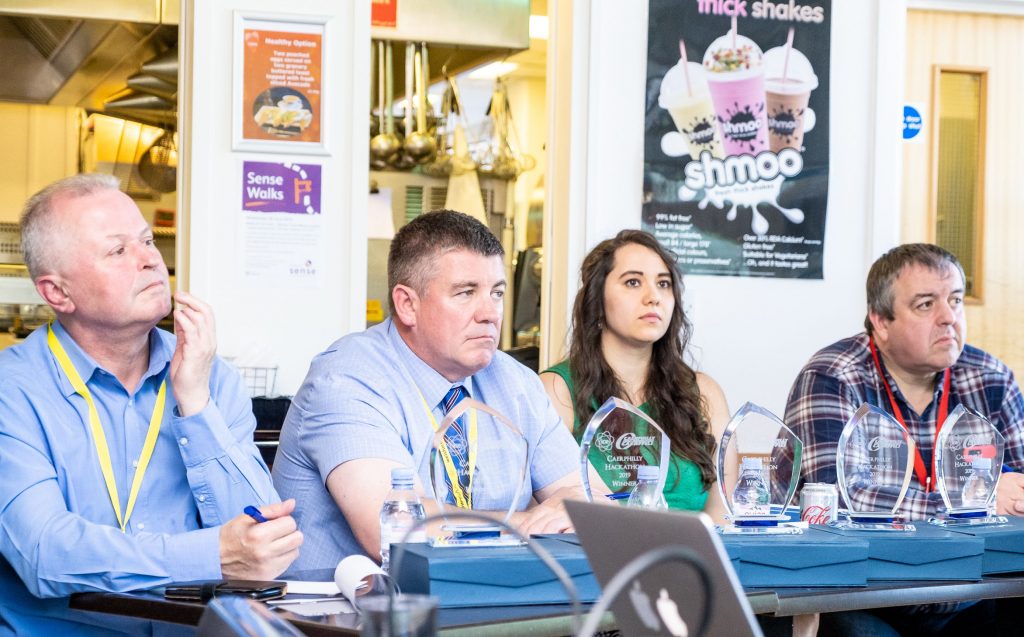 Deputy Leader and Cabinet Member for Economy at Caerphilly County Borough Council, Cllr Sean Morgan was one of the judges at the event. He said:

“The ‘Hackathon’ event was an opportunity for true collaboration between Caerphilly County Borough Council and entrepreneurs at Welsh ICE to seek solutions to some very real challenges in the foundational economy.

“The broad range of excellent ideas and possible solutions identified by the teams demonstrates the importance of sharing ideas and capitalising on the varied skillsets and expertise we have here in Caerphilly county borough”.

Check out our video of the Hackathon below:

I’m a Paediatric GP with a passion for teaching children and a love of baking cakes – my business will attempt to combine all my favourite elements together! I will be running baking classes for children with neurodevelopmental difficulties (e.g. autism, ADHD, epilepsy, behavioural disorders etc.). By getting to know children in a relaxed and […]

Energy consultancy for industry specialising in the development and use of micro-CHP technology in buildings whether semi-commercial or domestic. We provide business research into the fields of hydrogen for power and renewable heat for buildings. Locally we look to offer practical advice and support to the commercialisation of innovation energy research projects. Let us help […]