Campus Director Jamie McGowan has been named the UK Entrepreneurs’ Champion of the year at the Natwest Great British Entrepreneur Awards.

Now in its sixth year, the NatWest Great British Entrepreneur Awards celebrates the hard work and inspiring stories of entrepreneurs from across the UK.

The awards ceremony held on Thursday (24 January) in Coutts, London, brought together a range of businesses and professionals, all already winners of their respected regions across the UK. 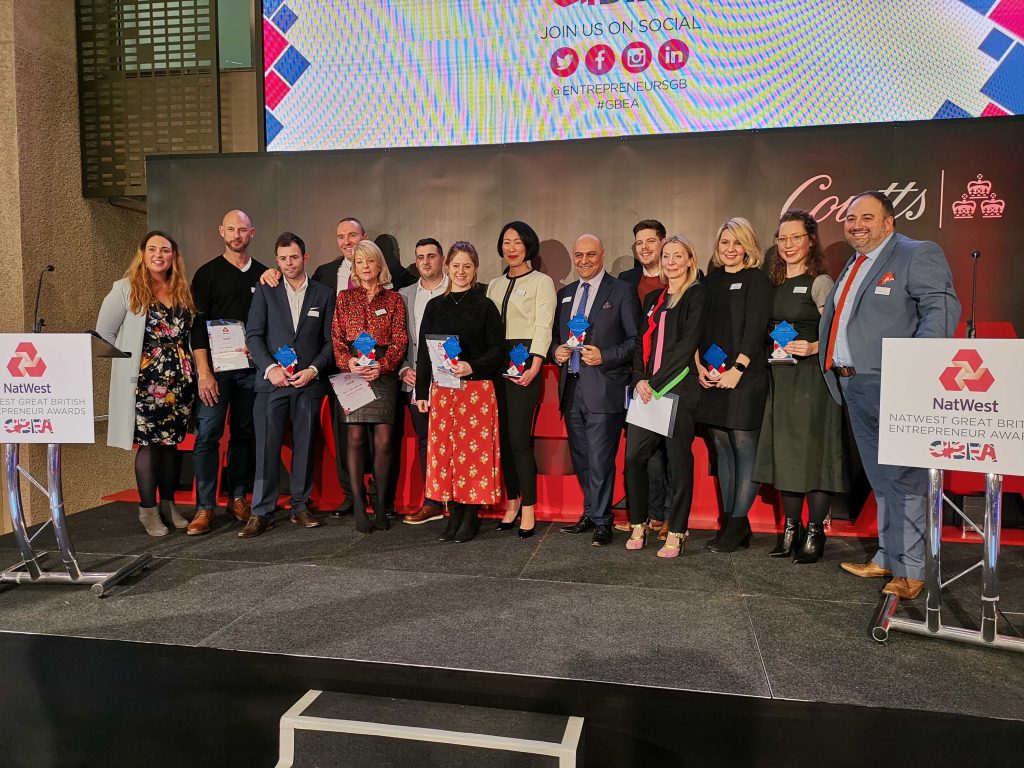 The award aims to recognise the tireless work of the individuals who nurture and support entrepreneurs, often behind the scenes, and promotes the role of the men and women who enable founders to succeed and reach their potential.

Speaking after the win, Jamie said,

“To say I’m shocked is an understatement. I was delighted to have been chosen for the Wales and south-west England award, so to have been named Entrepreneurs’ Champion at the grand final in London is something I’ll be proud of for the rest of my life.

“We have an incredible community at ICE which makes my job as Campus Director a lot easier. It’s a pleasure to come in each morning, and that’s down to the environment that we’ve fostered at the Campus, where the community support each other to grow and develop their businesses. Self-employment is a lifestyle that is only going to increase in the future, and we are proud to champion the role of the entrepreneur in today’s economy.”

After being named the winner of the Wales and the south-west Regional Award in November, Jamie was invited to attend the grand final along with the other regional winners.

“We added an Entrepreneurs’ Champion category to the NatWest Great British Entrepreneur Awards because while entrepreneurs often talk about the fantastic support to which they owe their success, these individuals are rarely celebrated, and we believe they are every bit as deserving as the entrepreneurs themselves.

“Jamie’s application really stood out as a clear frontrunner for this category. He currently supports over 200 startup businesses and spends his days linking, networking and introducing entrepreneurs to one another, developing an ecosystem with the wider businesses community in south Wales.

“Jamie told us that ‘true happiness comes from making a living doing the one thing you love’ and it’s inspiring to recognise someone that’s so passionate and enthusiastic about enabling entrepreneurs to fulfil their potential.”

The award comes following the announcement that Welsh ICE has been chosen to deliver one of four new regional enterprise hubs, with the Campus supporting the South East Wales Valleys region.

The hubs are funded by the European Regional Development Fund through the Welsh Government and will see over £4m invested to provide supportive spaces and mentoring for new and growing businesses.

Rachel Harris
Read more : The Valleys amateur triathlete turned entrepreneur shifting the cycle industry up a gear
View all Posts
We use cookies on our website to give you the most relevant experience by remembering your preferences and repeat visits. By clicking “Accept All”, you consent to the use of ALL the cookies. However, you may visit "Cookie Settings" to provide a controlled consent.
Cookie SettingsAccept All
Manage consent