It was a double win for Victoria Mann at the WalesOnline Digital Awards last Friday when she took home ‘Woman of the Year’ and ‘App of the Year’ for NearMeNow.

The Digital Awards showcase the inspiring work of individuals and companies across Wales who are at the cutting edge of digital business. They recognise the excellence that exists within a whole industry that is globally, socially and commercially relevant to Wales’ technological revolution.

The App of the Year category saw judges looking for a stand-out App, showing innovation, imagination and flair.

While the Woman of the Year category highlighted the awesome contribution of this region’s women in tech and aims to tell their stories to inspire a new general. Only 17% of people working in tech are women, and only 7% of A-level computer studies students are girls. 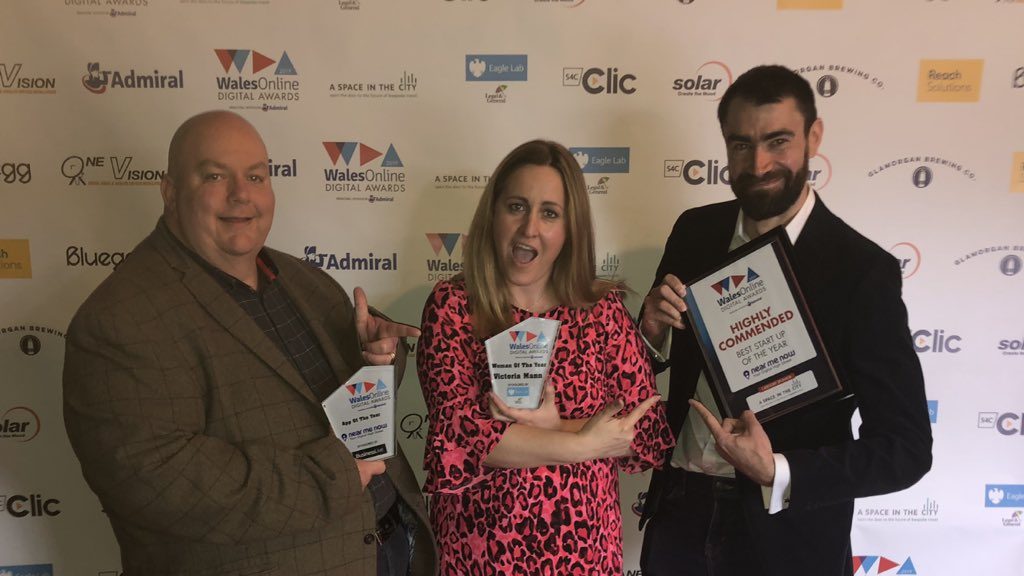 On the award wins, Vicky said:

“It took 10 years working closely with boards of directors that were predominantly male to have the faith to stick my head above the parapet and move forward with the seed of an idea I had.

In a male dominated environment it’s often difficult for a female to succeed as we operate in a slightly different way to the established norm. Directors and senior leaders from past employers GMAC UK, Picture Finance and Buy As You View, who I’m proud to also call friends, have supported and cheered me on, on this incredible journey and each one has supported me working in the way I choose to work.

I often say that having to prove myself over and over on this ten year journey allowed me to build a level of resilience and have faith in my own ability that led to me assuming a level playing field when leading a start-up company, but as the effervescent Helen Walbey once said, “For every one that has been on that journey and feels able to take the leap, there are ninety nine more that don’t”.

There’s something pretty special about being recognised on your home turf first and foremost for the work in developing the NearMeNow App that was competing on that level playing field, but to receive recognition as a female within the digital industry fills me with pride; knowing how difficult it is for others coming through and being recognised for my attempts to support entrepreneurs in the Valleys and female entrepreneurs across Wales in whatever way I can.”

Vicky has been based at Welsh ICE since 2017 and has recently partnered up with us to help deliver the latest cohort of the 5-9 Club in Church Village.

Welsh ICE
Read more : Double Award Win for NearMeNow at the WalesOnline Digital Awards!
View all Posts
We use cookies on our website to give you the most relevant experience by remembering your preferences and repeat visits. By clicking “Accept All”, you consent to the use of ALL the cookies. However, you may visit "Cookie Settings" to provide a controlled consent.
Cookie SettingsAccept All
Manage consent