An independent report has found that since our launch in 2012, Welsh ICE, has generated a £53 million benefit to the Welsh economy, surpassing the original projection of £36.3m from a similar report in 2015.

The 2015 report which was the first to measure and predict ICE’s impact since launching in 2012, found that the Campus had generated a £13.8m GVA benefit to the Welsh Economy. It was also predicted that if the Campus continued performing as it had done, it would go on to generate a further £36.3m, with a possible additional £13.9m if future job estimates were realised.

However, the figures from the 2018 report states that, based on the number of jobs created by current ICE members and graduated businesses, Welsh ICE has a current net Gross Value Added (GVA) benefit to the Welsh economy of £53 million across its six years. Thanks to funding from investors including the Welsh Government, approximately every £1 invested in ICE businesses has resulted in a £22 benefit to the Welsh Economy. 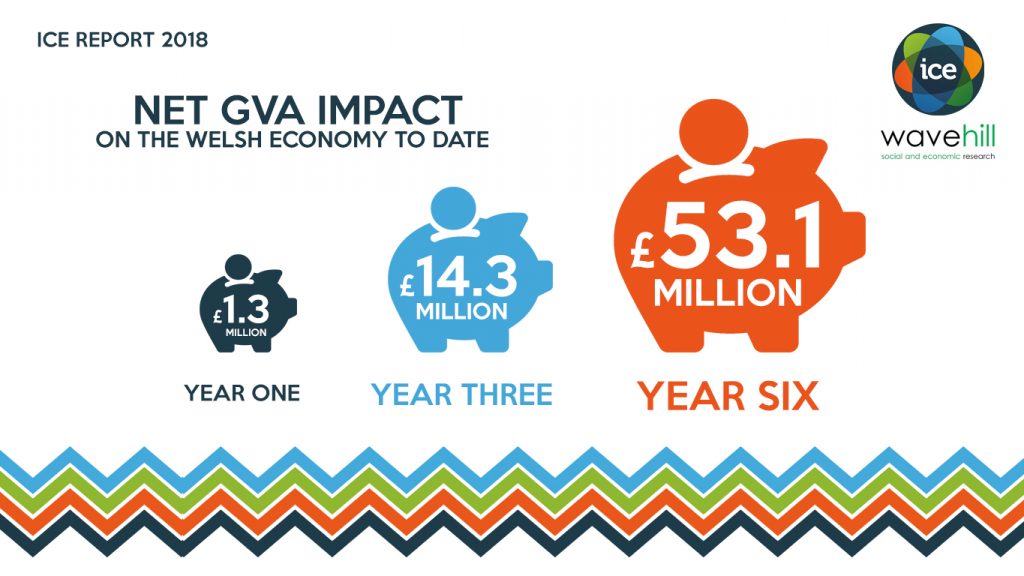 The report, completed by Social & Economic Research company Wavehill, looked at the number of Full-Time Equivalent (FTE) jobs created by businesses at ICE, as well as analysing surveys and interviews conducted amongst ICE members.

“The findings of this report really do demonstrate the hugely significant impact that Welsh ICE continues to have upon the economy, both locally and Wales-wide.

“I’ve had the great pleasure of visiting the centre and some of the many businesses it supports on many occasions, and am always impressed by the level of innovation, support and passion that goes into encouraging entrepreneurship.

“We’re extremely proud that Welsh ICE has chosen to call Caerphilly county borough home, and I have no doubt that this success will continue for many years to come”.

Other key findings of the report were: 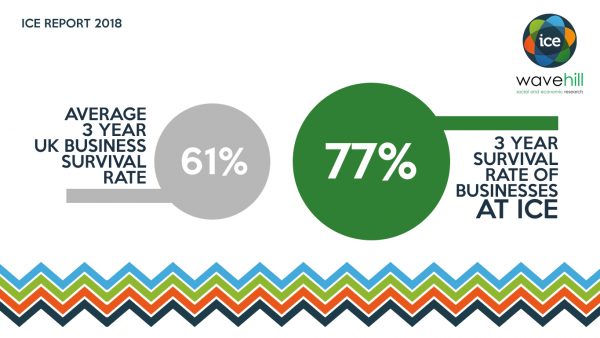 ●      73% of ICE members had developed formal agreements with each other, fostering natural referrals 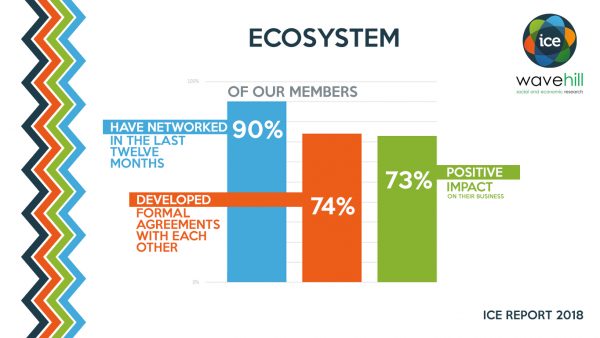 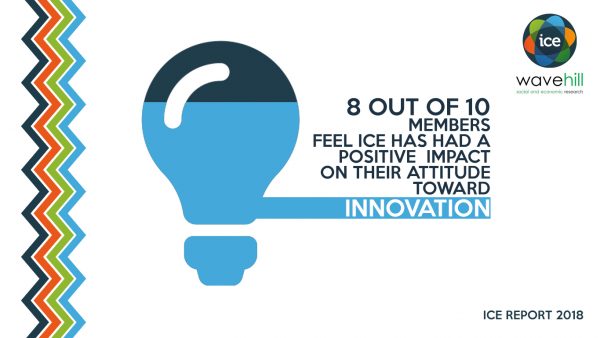 “The findings of this report are a testament to the hard work of all the business owners, staff and entrepreneurs based on campus. Simply put, the ICE model works and shows that if you build an environment that inspires community and gives startup businesses the right funding and support, they will thrive and create the jobs that have a wider economic benefit.

“Success through collaboration was the mission of ICE founders Anthony & William Record, Gareth Jones and Mandy Weston, and I am proud that we continue to build on that legacy.”

Looking to the future, the report finds that if the net GVA persists for a further three years, then in 2021 Welsh ICE should achieve a cumulative net GVA benefit of £70m+ towards the Welsh economy.

This comes after the news that three tech-based businesses at ICE raised over £1m between them in just twelve months.

The Campus is always interested in speaking to new or potential businesses through its funded ICE Space Programme. Jamie continued:

“We are always looking to reach out to those who have started a business or are thinking about making that leap. The spirit of collaboration and support at ICE is a testament to how welcoming the community is and we would encourage budding entrepreneurs to put their business ideas on paper and contact us. With the guidance and support of the ICE campus, it really is possible to grow a business of your own.”

●     77% of survey respondents are current members

●     Affiliates to the Welsh ICE are predominantly small companies – 61% recorded turnover of less than £50k and 57% have no more than two full-time equivalent staff.

●     73% reported the community environment provided by ICE was one of their main reasons for locating there, followed by almost two thirds citing the facilities as an important factor.

●     73% of those who network believed it has had a large or moderate positive impact on their business, including Members reporting they have received new clients and referrals from other members; have found suppliers; or simply that they gained new knowledge

●     48% reported that the community of businesses is the aspect they value most at the centre, followed by the availability of support (30%) and networking opportunities (28%)

●     Wavehill analysis reveals that 77% of businesses joining ICE as start-ups and established for three years or more have survived. This compares with a 61% 3-year survival rate for businesses established across the UK and in Wales in 2013

Welsh ICE
Read more : Welsh ICE £53M Net GVA Benefit to Welsh Economy
View all Posts
We use cookies on our website to give you the most relevant experience by remembering your preferences and repeat visits. By clicking “Accept All”, you consent to the use of ALL the cookies. However, you may visit "Cookie Settings" to provide a controlled consent.
Cookie SettingsAccept All
Manage consent